We are delighted to announce that Bugler Group is now an accredited Living Wage Employer! This means that every member of staff working for Bugler will earn a real Living Wage.

The real Living Wage is higher than the government’s minimum, or National Living Wage, and is an independently calculated hourly rate of pay that is based on the actual cost of living. It is calculated each year and is announced by the Living Wage Foundation as part of Living Wage Week. It is currently £9.00 in the UK, with a higher rate of £10.55 for London, reflecting the higher costs of living in the capital.

Over 4,700 organisations, including Bugler Group voluntarily choose to pay the real Living Wage because we believe that a hard day’s work deserves a fair day’s pay.

The Living Wage movement has benefited hundreds of thousands of families by enabling them to earn a wage they can live on. You can hear some of their stories here. 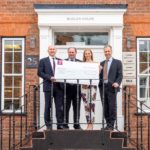